“The Great Reset” was the theme for the WEF 2021 which took place last week in virtual format and for the first time many of the key plenaries and debates were pushed through social media platforms in real time.

Previously, access to Davos has been preserved for the world’s most influential and elite which has always been a contentious debate, but this year the broader public could access content via live streams on YouTube and Facebook, leading to a very transparent display of public anger and frustration.

The irony was not lost on me. After nearly a year of the pandemic’s economic consequences taking root – this esteemed event was now in full public view. And public sentiment could not have been at a lower ebb.

I watched the Wednesday evening debate with Mark Carney where the call was made for vast increases in the number of carbon offsets sold, to increase to between $50bn and $100bn a year.

Carbon offsetting is an already sophisticated market many believe has evolved rapidly into a greenwashing challenge.

Already two UK environmental charities have written to Mark Carney to raise concerns over a blueprint for carbon offsetting. The voluntary market has been the subject of repeated scandals in which credits were awarded to projects that did not act in good faith.

I would encourage you to watch the debate with Mark Carney, Bill Gates, Annette Nazareth and Bill Winters if you haven’t already seen it and take a look at the ratio of likes to dislikes and the 500-plus comments.

We are already witnessing social suffering at a level not seen since the Great Depression and we are nowhere near actually hitting the economic rock bottom globally. This overwhelming sea of discontented voices needs to be taken very seriously. Sustainability goals cannot be achieved in isolation of the citizens input and co-ownership in design and execution.

I was, however, very encouraged to see the initiative between the United Nations Development Programme (UNDP) and partners, including the University of Oxford, and a number of non-governmental organisations (NGOs) to produce the largest survey of public opinion on climate change ever conducted. The Peoples’ Climate Vote was a vote from people across 50 countries demonstrating their voice for action against climate change. It really expanded upon core themes such as access to employment, energy, protecting nature, education and more.

This report is well over 60 pages, offering some rich insight into how people feel across the globe.

Striking analysis was abundant. I have just extracted two data sets below that I felt I demonstrated overall sentiment: 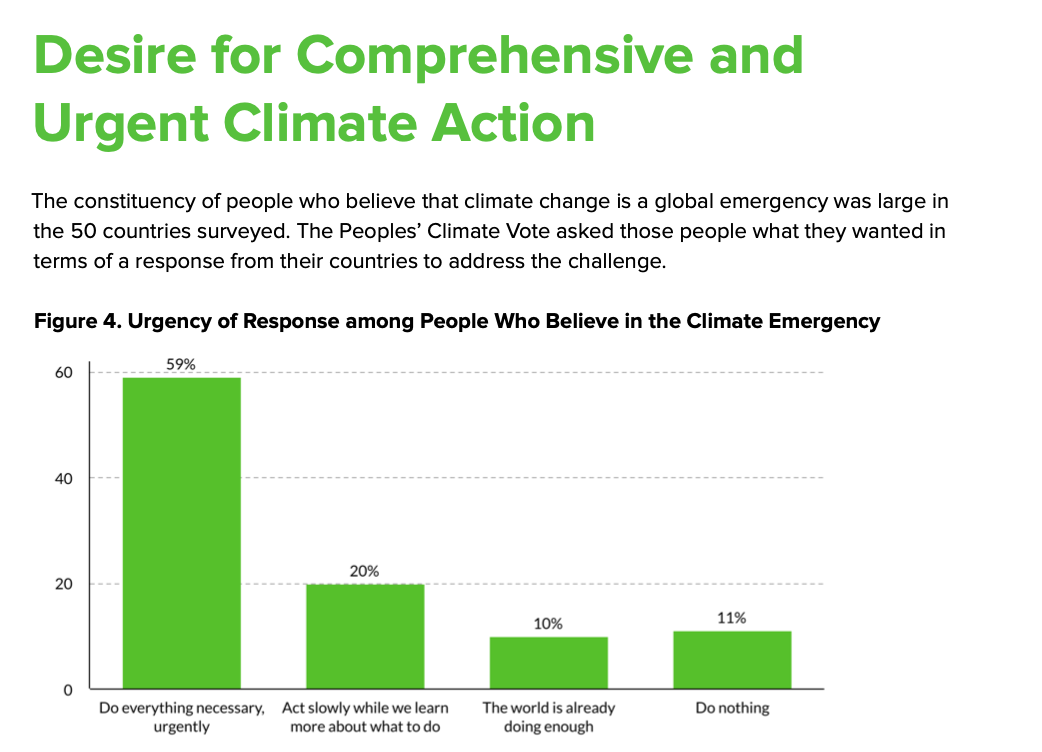 The vote asked which of 18 climate policies they would like their country to pursue to address climate change.

Four climate policies emerged as the most popular:

Each year BlackRock’s Larry Finks’ 2021 – Letter to CEO is always worth coverage. Last year his commitment to the climate change agenda was well covered. This year the tone was much more acutely steered to the impact of the pandemic on the real economy reality:

“The current situation remains one of economic devastation, with unemployment severely elevated, small businesses shuttering daily, and families around the world struggling to pay rent and buy food”.

He went on to cover the political turmoil facing the US but had encouraging words regarding the ‘tectonic shift’ towards sustainability and how the pressure on every board will grow in making the transition in policy and practice a reality. However, BlackRock believe the climate transition presents a historic investment opportunity.

And given that BlackRock is the marker for the global investment industry, Larry’s words carry a techonomic force too in the make or break for our climate crises. The investment industry lies literally in the wake of their actions. I for one would like to see how their technology innovation appetite internally and the guidance they offer to clients sets the tone for others to follow.

How Decentralized Autonomous Organizations Can Change Our World

Any cookies that may not be particularly necessary for the website to function and is used specifically to collect user personal data via analytics, ads, other embedded contents are termed as non-necessary cookies. It is mandatory to procure user consent prior to running these cookies on your website.